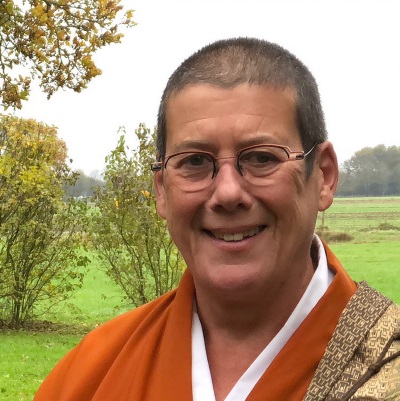 Read an interview with Jiun roshi (May 2016)

Zen master Jiun Hogen was born in Velsen, the Netherlands, as Jenny de Wit. When she met Prabhasa Dharma zenji, in 1982 she knew this encounter was very special and was going to change her life. Indeed, in 1985 she left the Netherlands for intensive training under Zen master Prabhasa Dharma in the U.S.A, where in 1986 she was ordained a nun with the names Dharma Udaka – Truth Water.

In 1989 she founded the Dharma House in Miami. In October of the same year she was ordained as an osho (zen priest and teacher) with the name Kanromon (Gate of Sweet Dew).

Although she was living in Miami, she travelled a lot with her master. For years she was in Europe every summer to attend all the retreats that Prabhasa Dharma zenji gave in the Netherlands, Germany and Spain. In 1993 she moved to Germany with the assignment to start a zen training center. In 1996 the International Zen Center Noorder Poort was founded. Since then, Jiun roshi has spent most of her time working and teaching there.

Jiun Hogen roshi is the spiritual leader of the International Zen Institute and its training center, Noorder Poort.